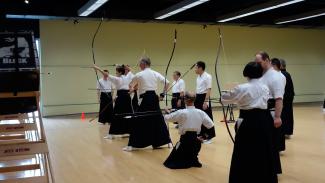 Kyudo literally means “the Way of the Bow” and is the Japanese martial art of archery. In ancient times, the bow was one of the primary weapons of the samurai but now it is used as a means
for self development and moral and spiritual growth. Kyudo is often described as “standing
meditation” where one learns to control breathing and the mind. You do not become oblivious
to your surroundings but rather you become more aware of them. This teaches you to react
calmly and resolutely to your environment.

$150 (+HST) for Feb-Apr 2023
*Experienced students only. New students with experience should contact us at jccc@jccc.on.ca before registering.