Opening reception: Sunday, August 18, 2 pm with attendance by artists and music by Bruce Tatemichi and friends. Light refreshments will be provided.

Barb Miiko Gravlin and Mary Akemi Morris were born two years apart near the end of WW2, with the surname Nishimura, in Tashme internment camp. Their interest in art, and the eventual significance of artmaking in their lives sprang from the isolated intensity and restive imaginings of their shared childhood. But each developed her artistic skills and vision in the practice of very different mainstream conventions: abstraction and realism. There was no ostensible acknowledgment of their Japanese Canadian roots. The naming of themselves as “Tashme Sisters” reflects an awakening to identity that, if not expressed in the works in this exhibition, is firmly demonstrated by the inclusion of recently produced “side-bar” materials such as Morris’ researched panels on the family history, and Gravlin’s illustrated book of childhood tales and memories, Yellow Cherries.

Their approaches to art practice contrast sharply as well. Gravlin’s early-on immersion in the exploding Toronto art scene of the 1960s, the rhapsodic bursts of painting mixed into the doleful reality of making a living in commercial design work, summarizes the episodic nature of her life in art. It’s a rambunctious narrative compared to her sister’s pragmatic path. Mary Morris obtained a Fine Arts degree at the University of Toronto, became a teacher, and pursued painting as a steady honing of technique and a carefully integrated and relaxed activity in her life. 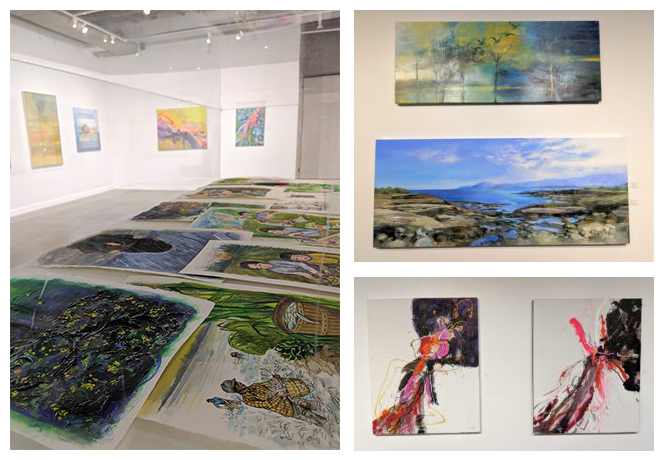 Q: Can you tell me a little bit about yourself?

Mary: I was born Mary Akemi Nishimura in the internment camp of Tashme, British Columbia a few weeks after the Second World War ended in September 2, 1945. I am a Nisei/Sansei (second/third generation Japanese Canadian), the sixth of seven children born to Yachiyo (Miike) and Kinsaburo Nishimura. I presently live in the city of London, Ontario.

After graduating from Fine Arts at the University of Toronto in 1968, I taught art in the Toronto and London Boards of Education. I started painting watercolours after retiring from teaching and took part in various group art shows in and around London, Ontario. One of the first group shows was at the 1975 Artisan Exhibition at the original Japanese Canadian Cultural Center where I displayed wall hangings and pottery. In the past fifteen years I have concentrated on acrylics, painting representational landscapes based on my travels.

Barb: I’m the 5th of 7th children of ‘Issei’ Kinsaburo and ‘Nisei’ Yachiyo ( nee Miike ) Nishimura. I don’t recall much of Tashme being born in 1943. What I do remember is described in my book ‘Yellow Cherries’.

How did you start making art?

Barb: My older sister, Joan, taught my sister, Mary and I how to draw making cut-out dolls when we were 3 or 5 years of age on the farm in Cedar Springs, Ontario. Later in 1961, I was catapulted into the art of painting at an avant-garde school called ,’The New School’ in Toronto. Much local recognition and media attention occurred at the time including in 1965, a Canada Council Travel Grant in painting for 6 months in Japan.

Mary: When I was a preschooler in a small, rural community in south-western Ontario I drew constantly with my sister Barb.  Our artistic, older sister drew pictures for us and we tried to copy them as well as we could.  Art has been a constant thread in my entire life.

Mary: Nature inspires me with its infinite variety, mystery and sense of order. I try to capture the immediacy of the light, colour and movement in the landscape as simply as I can.
Barb: My inspiration comes from an emotional experience or a beautiful vista in nature.

How do you know when your work is finished?

Mary: I do not think I have considered any of my paintings “finished”. One difficulty for me is to stop before the work becomes overworked.  After I sign my name in the corner of the canvas and feel that it is somewhat completed, I always still see something in the painting that I am tempted to rework.

Is there a tool in the studio that is indispensable?

Barb: The tool in my studio that’s indispensable is my Yamaha music system.

Mary: Yes, my cat who sleeps and purrs beside my painting table, keeping me calm and focused.