Each year, on November 11, we remember all who have given their time and lives in service to Canada’s military. We remember those who served in WW1, WW2, the Korean Conflict, the War in Afghanistan and various peacekeeping missions. At the JCCC, we specifically remember those Japanese Canadians who have served Canada, even during times when they were not wanted or appreciated.

In this clip, Tomi-Taro (Tom) Nishio recounts his time as part of the British Intelligence Agency in India during WWII. He explains the importance of Japanese Canadian nisei like himself volunteered to join the Canadian Armed Forces during WWII, illuminating the anxieties faced by Japanese Canadians after the bombing of Pearl Harbour.

Timothy Takasaki is a Grade 9 student. He is a long time volunteer at the Japanese Canadian Cultural Centre and Bayview United Church. This rendition of O Canada by Timothy is in dedication to Remembrance Day 2021.

"I've done my last duty to my comrades. They are gone but not forgotten."
(Masumi Mitsui, 1985) 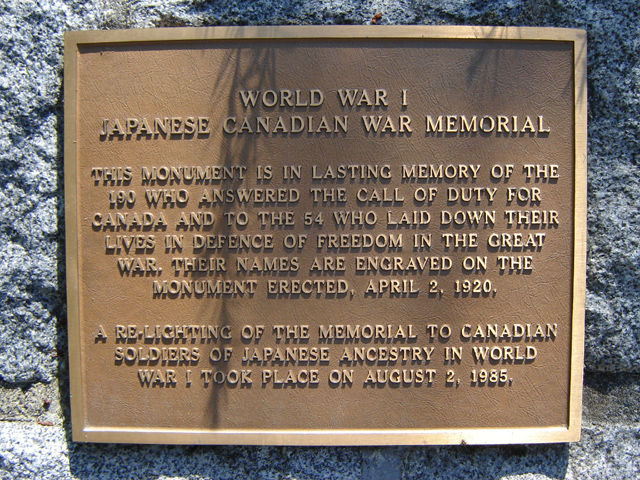 Plaque at the Japanese Canadian War Memorial, Vancouver, B.C. Image from the City of Vancouver, https://vancouver.ca/parks-recreation-culture/monuments-and-sculptures.aspx.

A lit Japanese lantern stands at the top of the monument, but it was extinguished for over four decades after the bombing of Pearl Harbour and Japanese Canadians were declared enemy aliens of Canada. It was not until 1985 that the lantern was relit in a ceremony by the last surviving WWI veteran Masumi Mitsui. In a photograph taken by Tamio Wakayama during the ceremony, Mitsui at the age of 98, stood tall in full military solute. After the ceremony, Mitsui aptly said in an interview, "I've done my last duty to my comrades. They are gone but not forgotten." (Dick, 2010, p. 447). 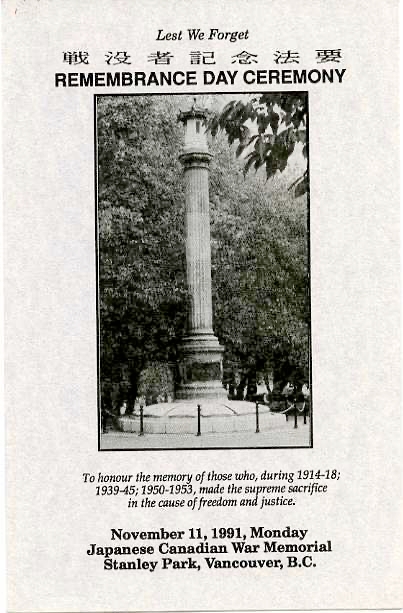 During WWII, niseis continue to enlist in the army to fight for Canada. Despite the hurdles, 119 nisei men were enlisted as translators in the Canadian Intelligence Corps. After the war, most continued to serve throughout Asia as translators within the War Crimes Investigation Force and also in Japan during the American Occupation.